Yesterday we slept in and then drove out to Flagler Beach, which allows leashed dogs on a large portion of their beach. It was gorgeous! Sunny, not too hot and we basically had the beach to ourselves. Queezle wasn't sure what she thought of the surf at first, but she got used to it and was bebopping cheerfully along with me.

The sand there is almost entirely broken bits of shell, which is really neat. There were some larger shells as well (Queezle tried to eat them...), and sedimentary rocks made up of shells. A couple sandpipers went by, and we could see a pelican off shore. It was a good day.

This morning we picked up Popper the Aussie, Tia's nephew who was competing in some of the junior competitions with his owner. She had to take a plane home, so Popper is going to ride back North with us. 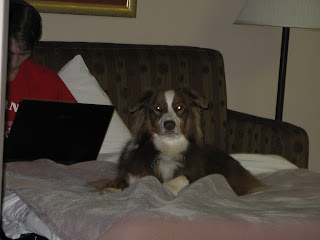 There were 28 Tervs entered under judge Tom Davies. We filled up the entire ring! The Q showed very well the whole time. After a LOT of deliberation, Queezle was awarded second Award of Excellent! The third AOE went to her daughter Demi, which was very exciting. 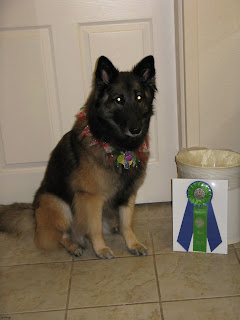 After showing, Q and I changed into street clothes and went over to the Meet the Breeds booth, where we hung out for a little while and Queezle greeted people who were interested in the Belgians. 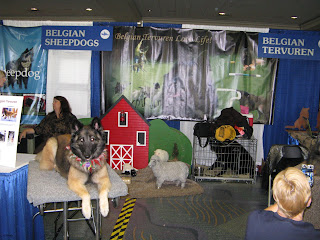 All in all, it has been an excellent trip.