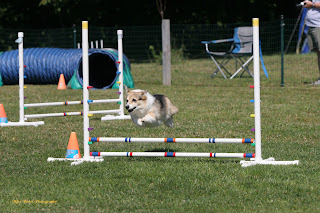 A couple weeks ago Tia, Flash and I went to the Syracuse Obedience Training Club's agility trials. Tia had a great weekend, qualifying in Exc Jumpers the first day and with a nice run in Standard, and then on Sunday getting her first double Q towards her PAX (Preferred Agility Excellent - basically the agility championship for dogs running at the preferred jump height)! However, although Tia was outstanding, my most exciting brag comes from Flash.

Flash is over 12 years old, and a maniac when it comes to agility. She runs fast enough to beat big dog times, and will do anything to go faster - including knocking bars and leaping over contacts, both of which are mistakes that cause you to NQ. Flash moved down to preferred 7 years ago. The lower jump height helped a lot with her bar problem, so she is now in Exc Jumpers (and got her first leg on Saturday!). Contacts on the other hand were still a major problem, particularly on the dogwalk. We managed to pull off two qualifying runs, and then have been hunting that last leg for almost two years.

Sunday before her Novice Standard run, I told Flash that if she qualified she would get a double cheeseburger on the way home and another one when I got home from college later in the week. Into the ring we went, I took off her leash, and she zipped right up and over the dogwalk and hit the contact! All the bars stayed up and she hit all the contacts, and at long last Flash finished her NAP with a first place!

Flash is now officially retired from the Standard class, as I don't like her doing the a-frame at her age any more, especially since she runs so fast and crazy. She will still be blasting through Jumpers and FAST as long as she is happy and sound. Gotta love my crazy old dog!
Posted by Kate at 9:20 PM 2 comments: 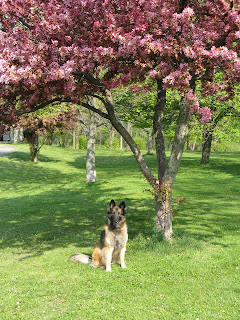 I have lots of exciting news from the past few weeks, so I figure I will spread it out. Firstly, my mom and I drove from central New York to Pottsboro, TX for the Terv National, which was the week of May 1. Queezle and I showed in agility, obedience and conformation.

In agility, the Q was WILD. Considering she hadn't seen me in weeks and had just spent three days in the car, it was a miracle she stayed in the ring! She ran fast and a touch out of control, but we had really nice runs in Excellent Jumpers both days. The one day *I* caused her to knock a bar because I called her name right when she was going over a jump. Although we didn't qualify at all, I was pleased with her runs for the most part.

In obedience we were just entered in Wildcard Novice. In the Wildcard classes, you can praise your dogs throughout the runthru and can choose to skip one exercise and get full points for it. Queezle and I chose the offlead heeling as our Wildcard, but I opted to still do it for practice (the judge just couldn't take any points off even if we had errors). Queezle did a very nice job, and we ended up with first place! The whole class was a lot of fun - my mom and her boy Hokey got second, our friend Debbie Deuth with Trixie was third, and Sue Fregien with Ember, who is Hokey's niece, was fourth.

In the Best of Breed competition Queezle made the first cut but didn't make it any further than that. Considering there for over 50 other Terv bitches and over 60 dogs, that is still an accomplishment! I also got to show Queezle's daughter Lexi in Puppy Sweeps and her mother Diva in Veteran Sweeps. Lexi did not place, but Diva got second out of a large class. The old girl's still got it! Queezle had one other daughter at the show, Demi, who also made one cut in Best of Breed.
Posted by Kate at 7:11 PM No comments: