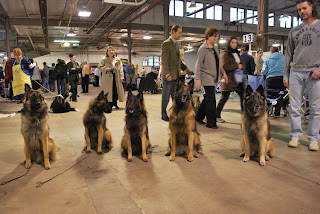 On the 19th I got on a bus at 4am to drive to Philadelphia for Cornell's final football game of the season (and thus the last marching band performance of the season). It was a gorgeous day, Cornell even managed a WIN and the band, as always, was awesome. Returned home around 11pm...
...only to get up at 6 for a dog show. Sometimes I doubt my sanity. It turned out to be another good day. Queezle was first up ay 8:30. She was SO excited to be at a show - this was her first conformation show since the first weekend of July, and her first show of any sort since mid-October. After our down and back the judge asked me to slow her down - yeah right! She ended up going Best of Breed. The photo is of the Q with four of the other Tervs entered - from left to right they are Tag, Molly, Storm, Savvy and Queezle.

Next was Belle the Vizsla. She went Winners Bitch over one other entry, giving her her 8th point. She is now officially over halfway done!

I also showed Will the Shetland Sheepdog puppy. This was his third show ever and first indoor show. He still isn't thrilled about the table, but he stands solidly and is a happy camper gaiting around the ring. He won his class.
The Q was even more psyched for going into Group. Talk about fluffed, puffed and ready to roll. Her down and back was controlled, but on the go-around she took off like she thought she was running the Kentucky Derby! Maniac. At the end the judge had each dog go around one at a time, at which point Queezle gaited like a dream. We didn't end up placing, but I was quite pleased with my wicked wild dog and a handler who had been watching from outside the ring said that she is the cleanest dog coming and going that he has seen in years. Go Q!
Next up is Eukanuba. Only a few more weeks...
Posted by Kate at 8:13 PM No comments:

Hokey has come up with cancer in his nose, so for the past few weeks he has been going in to the vet hospital at Cornell every day for radiation. To minimize driving but still avoid Hokey staying at the hospital, I have been picking him up and dropping him off every other day while my mom takes the opposite days (so he spends one night at home, one night with me, etc). He is now halfway through his treatment and doing well.

Today the waiting area was quite busy when I came in to pick him up. One of the techs came out with Hokey, and as I walked over to them a guy came in with a Border Collie puppy, probably between 3 and 4 months old. First mistake: he had it on a flexi. Not even close to appropriate for that kind of setting. Flexis are great for outdoor walks, but should never be used indoors, especially in a place where there are lots of people and dogs. Even if you put it on lock, there is still a chance that button will get knocked by accident and your dog could get into all kinds of trouble before you notice. Second mistake: he is letting the puppy go up to other dogs.

Why is this a poor decision? For one thing, he's in a VET HOSPITAL. He has no way to know why any of the other dogs/animals are in there, and by letting his puppy socialize arbitrarily he could be endangering its health. Second, he has no way to know if those other dogs are friendly! This could start a fight at any point, and considering his puppy's age, a bad experience could seriously impact its future life and behavior. Always, always ask if the other dog likes puppies before allowing your pup to go up to another dog.

Hokey does not particularly like puppies anyway, and the clinic is a stressful place for him, further lowering his tolerance. He curled his lip, which the tech couldn't see and the guy completely ignored. Luckily I got there at that point and pulled the puppy back myself, informing the guy that he should not allow his puppy to approach strange dogs. I can only hope that it sunk in.
Posted by Kate at 4:05 PM No comments: 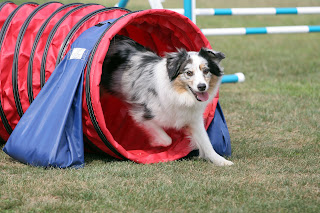 The SOTC fall agility trials were a couple weekends ago. Tia was the star of the weekend, qualifying both days in Excellent Jumpers! She is now well on her way to her MJP3. As for that aframe contact...
Queezle was just entered on Sunday. She was WILD and didn't qualify in either run, but ran with me, followed my directions and wasn't obnoxious, which was our goal for the weekend.
I also ran Dani in Jumpers, and she qualified on Sunday. She now only needs one more leg for her MJP!
Posted by Kate at 7:15 PM No comments: