So Much for Love

Queezle and I are chilling near Albany for the Ballston Spa shows. So far we have gone Best of Breed both days with no competition, and haven't gotten anything in the Group. Tonight I had fed her in the car and got myself a salad and smoothie from McDonald's.

When we got to the hotel I realized I have a lot of stuff to lug up to the room. No problem - I'll just combine bags and balance stuff carefully and we'll be ok. Got everything up the stairs and through our temperamental door and settled down to dine. I like to save some of the chicken for last, so I put aside a few pieces as well as the tomatoes which I was not going to eat. Fork in hand, I realize that between the cooler, Target bag, McDonald's bag, purse and dog, I had forgotten the smoothie in the car. Rats. I carefully balance the salad on the coat rack thing out of Queezle's reach and head back out to the car.

I had forgotten one thing - the lid housing the chicken and tomatoes, which was sitting on the nightstand. When I returned a minute or so later, the chicken had mysteriously disappeared and Queezle had her most innocent face on. Did she eat the tomatoes? Of course not.
Posted by Kate at 7:08 PM No comments: 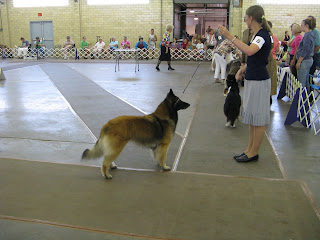 Since Queezle didn't have her litter after all, we have been going to shows the past few weekends. Queezle is thrilled to finally be back on the road, and the other girls have gotten to do some agility too.

Queezle showed one day in breed in Stormville, NY and got Best of Breed and a Group III.

In Bloomsburg, PA, Queezle went Best of Breed all three days and got a Group IV on Saturday. The photo is from Friday.

This past weekend we did four days of agility trials in Brewerton, NY. Flash was the star of the weekend out of my three dogs, earning her second Excellent FAST leg with a 1st place! Because she is almost 13, I tried to challenge her jump height so she could jump 4" in preferred. Naturally my little beast hasn't shrunk the quarter of an inch she needed! It would have been nice for her to jump lower, but we can deal. She had a bunch of really nice Jumpers runs but with bars down - here is one of them.


Tia wasn't running quite as well as she did back in June, though we did have some nice runs. In Standard on Sunday she just had one bar down that I hadn't even noticed! She is starting to do that funny cough/gag thing again. We are thinking it may be a bronchitis sort of thing caused by either the humidity or a pollen that is coming out now. Tia says that steak at every meal would fix everything!

Queezle is running wonderfully, except for being a brat at the weave poles. Working at home she gives me no trouble, but when I send her to the weaves at a trial she runs at me barking obnoxiously. I have started removing her from the course when she does that. It kills me because she is doing a really beautiful job even on difficult courses and is so fun to run, but if I get it through her head now that being a brat means the fun stops, she will be better about the weaves in the long run. I am also going to keep working her on really hard entries and doing weaves with lots of distractions at home - my thought process there is that if I can have her 100% confident that she can do the weaves correctly no matter what, doing them at a trial will be easy and not worth putting up a fuss. We are also taking a class with Tracy Sklenar to help with her contact issues (namely sailing over them with a gleefully wicked smile on her face).

Today we took the first load of my stuff down to the apartment in Ithaca. Only a few weeks left until school starts back up again
Posted by Kate at 9:27 PM 1 comment: