Queezle, my brother Tom and I departed Ithaca around 10am this morning, bound for Orlando, FL. Queezle was invited to the AKC/Eukanuba National Championship because she finished her Grand Championship last year. What better way to celebrate the end of finals than by taking a road trip to Florida in December?

The trip was pretty straightforward. Gas had gotten cheaper the further south we get ($3.19 in North Carolina!!!), weather stayed clear and still chilly. Harrisburg, PA was a little interesting with traffic and construction, but we got through that fine. Stopped in Maryland, Queezle posed with a sign. 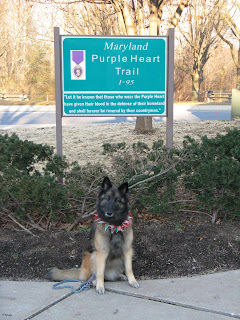 Washington DC and Arlington, VA were insane. Unfortunately we hit it at rush hour and managed to miss the special commuter lanes, so it was bumper-to-bumper traffic moving on average 30mph. Took us two hours to get out of there, including a brief food and gas stop. Didn't kill anyone though, and on we went.

Hit North Carolina a little before 8pm, where we stopped again to get a picture of the Q with the Welcome to North Carolina sign and fill up the tank. I am absolutely loving the 70mph speed limit! 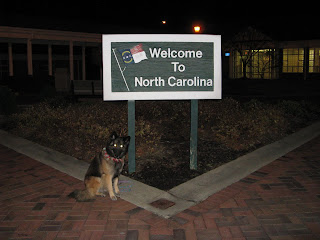 I called it a day at 10, having driven for 12 hours and 620+ miles. We're stopped in Smithfield, NC, which has a dog friendly Super 8 for anyone heading this way in the future. Queezle is thrilled to be on the road - she wagged her tail and smiled when we headed into the hotel, looking for all the world like a kid on Christmas morning. She is such a great dog to travel with.